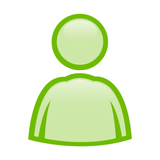 “I’m learning how to apply my class work to real-world communication problems.”